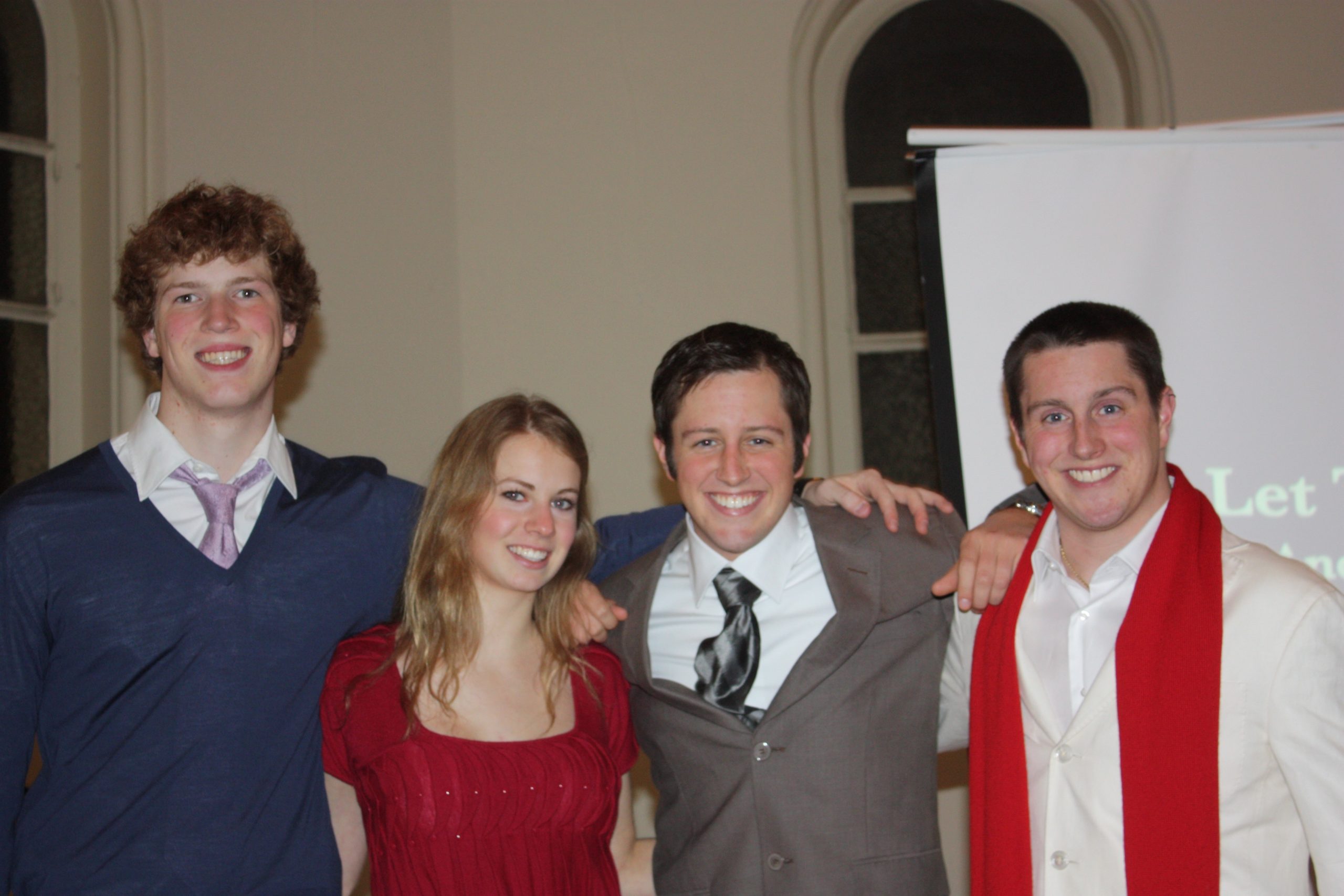 Happy New Year from the International Criminal Court in Den Haag!  If 2009 promises to be even half as exciting as 2008 – I’m sure to be a happy camper.

After about two weeks of familiarizing myself with Den Haag and work at the ICC, I set off for Neuchâtel in Switzerland, where I had been invited by Neuchâtel Junior College to present a keynote address at their annual Christmas banquet.  The connection was first made by my youngest brother Peter, who is currently pursuing a pre-undergraduate program at the school.  The experience was great.  I spent an hour talking to an audience of about 120 faculty and young students about one of my favorite topics in the world: the importance of acquiring field experience at as young an age as possible.  I think my passion for the topic was adequately conveyed as about 20 of the students approached me during the banquet to ask questions.  I swapped a couple of e-mail addresses.  Hopefully I’ve established connections that will last a long time.

The next day, I was invited to facilitate the College’s world issues class.  The students would ask me for an opinion or pose a sweeping question, and it was my job to play the expert.  Inevitably, some of the questions were actually quite philosophically complex and challenging, but I answered to the best of my ability and then facilitated further debate amongst the students themselves.  It was during this candid and spontaneous classroom conversation that I felt most at ease.  Indeed, it’s also where I felt most like a mediator, having to demonstrate the merits of two students’ opposing points of view while at the same time stealthily insinuating my own knowledge into the mix.  It was a very enjoyable and interesting experience.

Near the end of the session, my parents and middle brother Nicholas entered the classroom.  I hadn’t seen them for months and we were about to set off for St. Moritz to celebrate Christmas and New Year as a family.

Though I don’t have much of professional value to say about my time in St. Moritz, I had a spectacular time and it was really a beautiful thing to be reunited with my family again.  It had been well over six months since I had last seen my father and four months since I’d seen my mother, and although we all picked up right where we left off, they looked visibly older to me for the first time in my memory.  This thought catalyzed an important New Year resolution (or more aptly: a life resolution): to spend time with family whenever the opportunity presents itself.

It was wonderful seeing my two younger brothers.  In only six months, they’ve grown tremendously (in both stature and personality).  Both seem to have a greater sense of passion and purpose about themselves. We spent nearly all of the two weeks in Switzerland together, and I’m sure our conversations won’t soon be forgotten.

And one more reunion to mention: Carrie, Michelle and I all somehow managed to meet up for one wild and magical afternoon of adventuring in the exotic city of Vaduz, Liechtenstein!  Back in Boston, we had consistently joked about how funny it would be if the next time we saw one another was in an obscure European micro-state, and then there we were, all together in the sixth smallest country in the world!  Being with Carrie in London was fantastic (especially going to see the play “Wicked” with her, something I forgot to mention in my previous entry), but this reunion was truly stupendous!  When we weren’t in the midst of an international arm wrestling championship with an Austrian waiter or tobogganing down the mountains of Malbun, we were laughing and catching one another up on the rollercoaster ride that had been our first placements.  It was an experience that definitely served to re-affirm our incredible bond.  Carrie and Michelle are phenomenal women.  See you back in Boston in seven-and-a-half months!

Most of my time in St. Moritz was spent skiing and eating.  With respect to the former: the snow was some of the best I’ve ever experienced, and that’s saying something considering where I’m from!  Many people we met said that this year’s dump was the biggest St. Moritz had seen since 1960, meaning that the skiing was truly unparalleled.  Moreover, the skies were almost always a perfect blue and the runs were never overly challenging.  I’ve skied my whole life, but this was really something special.

With respect to the eating: I seriously must have gained 10 pounds while I was in Switzerland.  If it wasn’t the kalbsbratwürst mit rösti (veal sausage with potato hash browns smothered in a caramelized onion sauce) it was the fondue – and I don’t even normally like melted cheese!

Nice meals are always something I look forward to when traveling with family, especially when I’m coming out of three months of cabbage and goat meat (as was the case in Somaliland), but one dinner that really took the cake was in a little town called Sils.  At around 8pm, we all jumped on to a horse-drawn sleigh with cups of piping hot glühwein (mulled wine was always the drink of choice) and set off for a little Swiss-style cottage restaurant in the mountains.  The stars were out, the blankets were cozy and the whole experience was unforgettable.  It’s amazing how much moments of connection like these mean after several months on the road…

I should also take a moment to talk about the remarkable culture of St. Moritz.  The extreme wealth is visible everywhere.  It was all a bit overwhelming, but it definitely made for great entertainment.  And remarkably, I heard almost as many languages being spoken as at the International Criminal Court back in Den Haag!

I’d really enjoy talking more about Christmas and New Year celebrations, but this entry is already getting impossibly long.  I suppose I’m just enthusiastic about having seen my family again.  Needless to say, our Christmas spent lounging around the little Charlie Brown Christmas tree that we’d set up in our hotel room was perfect, and the conversation we had on New Year’s Eve with two new Dutch and Ukrainian friends we’d made was appropriately invigorating.

But now I’m back in Den Haag, sitting in my office at the ICC.  I’ve got a bunch of great memories from my family now, and hopefully they’ll be enough to tide me over until I see them again at the end of June.  It’s hard to believe that only six months of the Fellowship are left.  Time to make the best of them!