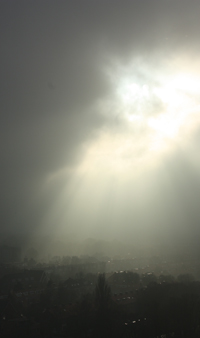 Though I’ve learned a great many things over the course of the past nine months, one of the most important lessons concerns perseverance and patience: with enough of each, everything in life will turn out beautifully.

I’m currently sitting in Eetcafé Sise, a Turkish bar around the corner from my apartment that serves some of Den Haag’s best mint shisha and that is always home to a sizeable community of rabid Turkish football fans, cheering on their favorite players in words I cannot understand.  For the past two weeks, it’s been a refuge of sorts; in the craziness of trying to get my third and final international Fellowship placement together, Eetcafé’s owner has come to treat me like a regular, anticipating my order the instant I step through the entrance and making me feel just a little more grounded when my mind is otherwise swimming.

Just a week ago, I learned that all of the plans I had made with the Child Soldiers Initiative (CSI) in Nepal, and all of the vacationing I was planning on doing in southern Algeria after departing the ICC, had completely crumbled.  CSI’s partner in Nepal, Search for Common Ground, decided that they already have too many international staff and cannot afford to take on another one.  The Algerian embassy in the Netherlands decided that they could not provide me, a Canadian citizen, with a visa.  Though I’d already gone through similar heartbreak with respect to my Afghanistan placement, and although everything managed to turn out wonderfully with Somaliland, I was still crushed.

Fortunately, I had no time whatsoever to grieve; with only two weeks left in my Netherlands placement, I had a final meeting with the Chief Prosecutor to prepare for.  After several 3am nights of feverish typing, I managed to complete a detailed 16-page needs assessment of peace education initiatives in Northern Uganda, a 6-page summary of the same document, and a 5-page report on past Fellows’ work, observations and recommendations for the International Criminal Court.  It felt like a return to my undergraduate thesis-writing days.

My meeting with the Prosecutor was, to be honest, quite intimidating.  It’s simply a difficult thing to wrap one’s head around the fact that one is sitting in his presence.  I’ve been similarly awed by the likes of Lt. Gen. Roméo Dallaire and that awe has caused me, in my inexperience, to stutter and avoid probing questions.  But in this particular conversation with Luis Moreno-Ocampo, things were different.  I was immensely impressed with him, but I also had something tangible to offer: 26 pages of research.  This gave me a sense of confidence and I managed to navigate the half-hour conversation with professionalism and ease.  It’s an extraordinary thing, to witness the thickening of one’s skin over the course of only three months.

The dialogue also offered an excellent opportunity for me to practice Insight’s Three External Skills (i.e., inquiry, acknowledgement and advocacy).  Where the Prosecutor was pleased with my work, I advocated for myself in the humblest and most succinct way possible.  When he was confused or searching for greater detail, I asked him questions and acknowledged his interests, thereby instilling in him a sense that he was being listened to and that the missing work would be accomplished before the end of my placement.  As silly as it sounds, it was exhilarating to move through the conversation with such a heightened awareness of what was being said.

With the conclusion of my meeting with the Chief Prosecutor, I had effectively wrapped up my placement at the International Criminal Court.  It was great timing, too, as the Court had just issued its historic indictment against Sudanese President Omar al-Bashir, and since I no longer had to spend all of my time researching and typing, I was able to simply soak up the tense and excited atmosphere.

I wish I could tell you something more provocative, but very little actually happened in the aftermath of the indictment aside from a veritable deluge of news reports descending upon my poor colleagues in the Office of the Prosecutor’s media department.  I didn’t help matters much; I used some of my newfound time to write and publish and article on the Bashir situation in a weekly newspaper back in my hometown of Edmonton (you can look it up if you Google my name and “Vue Weekly”).  It was later included in one of the Court’s daily press reviews.

But with more free time came more placement angst.  With just over one week to go before I had planned to leave the Netherlands, I still had no organization to partner with, much less a country to fly to.  Feeling a tad bitter that I had invested so much time and effort cultivating a relationship with the Child Soldiers Initiative, only to watch my opportunity to work with it evaporate, I started to investigate other organizations that I could partner with and that would allow me to conduct research for CSI on the side.  Fortunately, things worked out almost immediately.

I contacted the Search for Common Ground office in Bukavu, which is the capital of South Kivu province in the Democratic Republic of Congo.  Recalling my initial intention to work in DRC at the very beginning of this Fellowship year, I thought I’d give the country another shot.  I sent a placement proposal to the office director and received an enthusiastic reply the very next day.

And the ball just kept rolling.  In the days that followed, I managed to establish contact with both Mrs. Wanda Hall (a partner of Insight who is currently managing Interactive Radio for Justice in DRC’s war-stricken Ituri province) and Mrs. Sofia Candeias (a former ICC employee who is currently working with Rejusco, a Congolese NGO whose primary purpose is to reconstruct eastern DRC’s shattered judicial system).  They’ve provided me with a ton of extremely valuable security information and have even gone so far as to invite me to consult with them in the field for a week or two (should the security situation permit).  Exciting!

So as things stand, I’m currently poised to start work with SFCG in Bukavu on April 7th.  The majority of my work will entail conducting field research and interviews with former child soldiers, in the interest of determining the extent to which SFCG’s message and programming have penetrated that particular demographic.  This is perfect, as it’s precisely the kind of research CSI would like me to do for them, too.  Two birds with one stone.

But above everything else, this potential placement in eastern DRC represents the culmination of a lifetime of interest in Africa’s Great Lakes.  DRC has intrigued me more than any other country in the world, hands down.  Indeed, it’s what initially drew me to the School for International Training’s six-week peace and conflict symposium in Uganda, Rwanda and Tanzania back in 2005.  I had the opportunity to pay a day-long visit to Goma that summer, and as I stood on its volcanic plains, overlooking beautiful Lake Kivu amidst the rubble and detritus of the 2002 explosion of Mt. Nyiragongo, I knew that this had to be a place to which I return.

Of course, all of this is still subject to Insight’s approval.  I’ve been e-mailing David (Insight Collaborative’s President) on a daily basis, exchanging security-related information and drafting a thorough security assessment for myself.  Though I’m feeling quite optimistic about everything, I still can’t buy my flights until I’ve demonstrated to Insight that this is a wise decision and that I can ensure my personal safety at all times.  It’s great to know that they’re looking out for me like this.

As for my week of pre-placement vacationing, I’ve decided to spend a week lazing on the beaches and tracking the gorillas of the Republic of Congo (also known as Congo-Brazzaville, Congo-Kinshasa’s safer and mellower neighbour).  It’s a part of the world that I’ve never explored before and I’m really looking forward to it.  Moreover, I’ll be able to spend some time sailing on the Congo River, an adventure that I have fantasized about ever since I was a young boy.

All in all, I’d have to say that I’m very pleased with my placement here in Den Haag.  I’ve managed to accomplish quite a bit of work that is valuable to Insight (and hopefully to the Chief Prosecutor!) and I’ve seen a lot more of Europe.  My only regret is that I didn’t take nearly enough time to get to know my colleagues at the Court.  They’re a fascinating bunch, but I think the anti-sociability that had been bred into me by life under curfew back in Somaliland followed me into to the Netherlands.  Note to self: don’t let this happen in DRC.  You need to learn how to loosen up, Carl!

International Criminal Court, How I Will Miss Thee