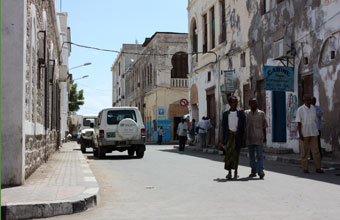 As I type these words, I am sitting in the Academy for Peace and Development’s cozy mefrishe, drawing long twigs of qat out of a plastic bag, plucking the softest leaves from their stems, and folding them into tiny balls which I place on the tip of my tongue.  I savour their bitterness, and wash them down with cool bottled water.  I am sharing this experience with six other men, one of whom is Gees, the director of the Academy himself.  They recline on thick blue pillows, occasionally adjusting their brightly coloured Somali sarongs.  They spend half of their time cracking jokes in a language I can’t understand, hollering so loudly that sometimes my ears begin to ring.  The other half of the time, they debate with one another in a conspiratorial tone, betraying the topics of conversation by slipping into English: “Djibouti port”, “Ethiopia and Eritrea’s border”, “voter registration in Somaliland”, “al-Shabaab”.  If I weren’t typing away on my computer, they would speak entirely in English, all for my benefit.  These mefrishe conversations – the very heart of masculine Somali society – represent the very best evenings of my placement here in Hargeysa.  Under no other circumstances have I learned as much or felt as connected to Somaliland’s history.  Indeed, the APD mefrishe is a political nerve centre, acting as a neutral good office for the very biggest names in Somaliland’s politics to discuss their very biggest problems.  For a scholar of dialogue such as myself, the mefrishe has been a site of total transformation.

The mefrishe has been especially enjoyable since I returned from the Rift Valley Institute’s week-long Horn of Africa course in Djibouti.  Though I can’t say I am much closer to understanding the truly apocalyptic politics of the region, I now know which questions are on the tips of everyone’s tongues, and which topics will make for the most vigorous conversation.  And in asking these questions, I become more connected to this country every day.

The Horn of Africa course was a huge success, and I’m very glad I spent the amount of money that I did to attend it.  Under no other circumstances would such an all-star cast of lecturers assemble to discuss such contemporary political issues.  Lee Cassanelli, one of the world’s foremost historians in all things Somali, was in attendance.  Mark Bradbury, Somaliland’s most preeminent scholar, was around to have a personal conversation with me regarding Hargeysa’s seemingly miraculous movement towards peace.  And Ken Menkhaus, truly the biggest name in present-day Somali politics, blew my mind again and again by his spectacular presentations.

And those were just the lectures.  Among the fifty-some students were British and Canadian diplomats to Eritrea and Ethiopia, former American military attachés to Afghan ambassador Khalilzad, representatives of the Government of Southern Sudan, European PhD students, UN OCHA security experts, and more.  As per usual, I was a bit overwhelmed by everyone’s ages and experience, but for the first time since having started the Fellowship, I truly launched myself into conversations and debates, throwing my self-consciousness to the wind, fighting passionately for my convictions (while attempting as much inquiry as possible, of course), and building contacts that I’m sure I will rely upon for the rest of my professional life.

And now the mefrishe is buzzing with discussion of African socialism: Mengistu, Che Guevara in the Congo, Siad Barre’s anti-clan ideology…  I’m in my element!

By the end of the week-long course, we had covered everything from the historical origins of Islamism in the Horn of Africa to lessons learned from the failed UNISOM mission in Mogadishu.  We had explored the pros and cons of elder involvement in modern African democracies, traditional mechanisms of effecting retributive and restorative justice, and possible points of reconciliation between Ethiopia and Eritrea.  We were in awe when we were told about a Saudi plan to build a bridge between Djibouti and Yemen, linking the southern end of the Red Sea by land.  And during our group dinners, we were even been introduced to recitations of Somali poetry and beautiful Afar guitar music.  Without a doubt: it was a great decision to have attended.

Once the whole course had finished, I had two free days before I was set to return to Somaliland.  My new Swedish friend Ulf and I tried to organize a day of scuba diving (something that would have surely pleased the scuba-crazy staff of Insight), but after showing up at the fishing port at 6:30am and waiting around for two hours, we received a phone call saying that the trip had been cancelled.  This was a shame, because it’s whale shark season and we were hoping to see some of the big fish.  Fortunately, I’ll be returning to Djibouti for a two-day vacation at the end of November.  I’ll try again then.

On the second day, Ulf and I drove out to Doraleh, where we went swimming in waters whose warmth could only be rivaled by that at Berbera.  We spent hours in the sun, turning into burnt prunes and talking about the future.  Amazingly, Ulf and I are on the exact same professional paths: both of us want to pursue disarmament, demobilization, reintegration efforts in Central Africa and Asia, as a means of leapfrogging into the world of high-level wartime mediation at a later date.  What are the odds of that?

I returned to Hargeysa on Daallo Airlines, the national carrier of Somalia and easily the sketchiest fleet of airplanes I have ever encountered.  They’re propeller planes of Soviet origin, and I wouldn’t be surprised if they had been built in the 1960s.  My pilot was a chubby French guy wearing sweatpants and a Hooters t-shirt.  My seat wouldn’t lock in place, and when taking off, I would recline into a completely horizontal position.  When flying through clouds, moisture would somehow penetrate the cabin, through invisible but worrisome holes.  Unsurprisingly, I later found out that the UN forbids its workers from flying with Daallo Airlines.  It was certainly an experience, though!

Upon arriving at Egal International Airport, I had the strange sensation that I was coming home.  After just two months in Hargeysa, I’ve become deeply attached to its streets and its people.  This time, when moving through immigration, I was unfazed; in the noise and the jostling and the chaos, looked at the two other foreigners that had been on my flight with sympathy and amusement.  I was met by Abdi, APD’s main driver, and I greeted him like an old friend.  And during the 20-minute drive back to the Caritas NGO compound, I tested my knowledge of directions; I was able to anticipate every turn.  It’s going to be difficult to leave this place.

I’ve had to play a lot of catch up since returning from Djibouti.  My first two priorities were to respond to all of my e-mails (which had slowly accumulated to the point that it took an entire day to respond to them all) and to have a long overdue Skype conversation with Insight’s President, David Seibel who has been in Singapore for the past couple of days.  It was a delight to hear his voice again.  And perhaps more importantly, it was really invigorating to hear how proud he was of the work I was doing.  Though the Internet connection only lasted about twenty minutes, we covered quite a bit of ground, and I have a renewed interest in keeping in really good contact with Boston!

And what happens next?  Tomorrow, I leave for Burao, the first stop on my cross-country, two-week workshop road trip.  Let me explain: the capstone contribution that I’m going to make during my Somaliland placement will be a series of five two-day workshops on the topic of non-violent demonstration.  Over the coming days, I will teach approximately 150 young Somali men and women everything I know about mediation, negotiation and communication.  It’s going to be an extraordinary test of my confidence and skill, but I’m not the least bit intimidated.  I’ve already trained three co-facilitators who will help me with translation and the management of exercises, and they’re blown away by the material.  One of them, my friend Anan, has even employed the “inquiry skill” to improve his relationship with his girlfriend!  This is just the tip of the iceberg!

After Burao, we will proceed to Berbera (where we’ll tack on a day at the beach to our busy schedule!), Borama, and finally back to Hargeysa, where we’ll be holding two workshops.  Interestingly, APD’s camera crew will be following every move we make, in the interest of producing a 20-minute documentary on the workshop later on down the road.  Should make an awesome souvenir for the office, huh?

And that leads me to today, which I spent trying to translate exercises, finalizing budgets and typing this journal entry!  Life is grand and I’m already lamenting the fact that I’ll have to leave Somaliland in a month’s time.  Reminding myself of this fact, however, makes me want to return to the mefrishe conversation that is buzzing all around me!  I hope all is well with whoever happens to be reading this, and I will be sure to write again soon.  Until then!