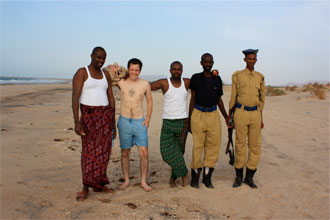 I made my grand Somaliland debut on September 21st, two weeks after having arrived in the country, at the Academy’s International Day of Peace celebration.  In the week leading up to the event, a team of young Somalis and I organized what would be a two-part workshop, half devoted to school-aged children and half devoted to post-secondary students.  The former group, made up of about forty children from all grades coming from schools all around Hargeysa, would spend the morning painting in groups of three, trying to depict their understanding of the meaning of peace.  The latter, made up of about seventy men and seventy women, would listen to a series of peace-oriented speeches and dramatic performances, followed by a two-hour communication seminar facilitated by me and the Academy’s senior researched, Mohammed Ibrahim.  The preparation was hectic, but the day itself was a rousing success.

My work in Somaliland, if I haven’t mentioned it yet, centers on the topic of non-violent demonstrations staged by youth.  A major problem across Somaliland has been the spontaneous eruption of violence on the part of youth who, by virtue of weak linkages to government, feel as if they don’t have voice in important political matters.  Trying to tackle this issue has been a controversial business and has resulted in my being asked some pretty challenging questions.  For example, one young man stood up during my International Day of Peace workshop and asked, “At what point does violence become an acceptable tactic in demonstrations?”  My God!  The first thing that went through my head was, “I’m all of 22-years old.  There is no way that I can answer this question with any authority!”  And yet, authority was what was demanded of me, so I gave a roundabout, two-part answer: I started off by acknowledging the tremendous sense of frustration that youth must feel when facing a government that seems to ignore them at every turn.  I told them that they have every right to feel upset and dissatisfied when excluded from political processes.  However, whenever one begins to feel drawn towards violence, one should pause and ask two questions.  First, has one been clever enough in one’s appeals to government?  Has one been appealing to the right people, or has one set one’s sights too high (i.e., on communication with ministers or the President himself)?  Second, what can the community do to improve the situation?  Before attacking the government, one should stop and think about whether there is anything the community can do itself, peacefully and independent of the government, in order to make the situation better.

I left my answer at that, and it appeared to have satisfied my questioner.  But I myself was deeply uncertain.  For example, who does one appeal to, in places like Mogadishu, where there is no government in power, where there are no intermediaries, let alone any ministers or presidents?  And what mobilization is possible when the community is so frightened and broken that it cannot trust itself?  I’m sure there are answers to these questions, but I’ve got a lot more thinking to do before I find them.

Fortunately, when I haven’t been pondering these heavy thoughts, I’ve been having fun with Hargeysa’s NGO community.  Despite my initial shyness, I’ve managed to meet some truly extraordinary people.  Mind you, they’re all older than me; I really do think I’m the youngest foreigner in the country right now!

Due to curfew, which for most NGO workers is 10pm, our socializing has been quite tame, consisting mostly of movie nights at Halo Trust (a landmine and UXO clearance agency), rooftop birthday parties near Maan-Soor Hotel, and one wonderful trip to Berbera on the Somaliland coast.  150km north of Hargeysa, Berbera is famous only for playing host to Africa’s longest runway (built during the Cold War to support American space shuttle landings) and a splendid stretch of empty white sand.  Five foreigners and I decided to celebrate Eid, the conclusion of the Islamic holy month of Ramadan, by visiting this beach, and its waters were easily the warmest I’ve ever felt.  Aside from our accompanying SPU (i.e., our two fully armed Somali bodyguards), the whole experience felt just like being stranded in the Caribbean!

In spending more and more time with fellow expats, I’ve learned a lot about the deteriorating security situation in Somalia proper and, increasingly, Somaliland itself.  For example, one of the women with whom I traveled to Berbera and who has lately been responsible for Somaliland’s first formal nationwide HIV/AIDS awareness campaign was recently the target of death threats issued by an Islamic jihadist organization that mistook her work as being supportive of prostitution and homosexuality.  As a result, the UN issued a new 6pm curfew for Berbera and its environs.  On another occasion, I met a 27-year old Swede who had only just escaped a day-long kidnapping in South Central a few days prior.  I have yet to meet anyone with as uncomfortably intimate an understanding of al-Shabaab and its tactics.  And on yet another occasion, just a few months ago, the Armenian director of Halo Trust’s operations in Somaliland was almost fatally shot over a contract disagreement with a local Somali employee.  Fortunately, I still know that I’m very safe doing the work that I’m doing here in Somaliland, but I do worry for my new friends from time to time…

Two other quick highlights before I sign out.  First: I recently received a care package from my brother Nicholas back in Canada.  Aside from a new and much needed power cable for my laptop, it contained Eat-More chocolate bars (my traveling candy of choice), Sour Patch Kids, contact lens solution, the complete first and second seasons of “24”, and a DVD of Nicholas’ photos from his volunteering stint in Ghana.  I’ve never received a care package while on the road before, and I was really surprised by how happy it made me!

Second, I have tasted camel meat for the first time in my life.  My boss here in Hargeysa, Bobe Yusuf, swung by my office one afternoon and asked if I’d had lunch yet.  I said no, and the next minute, I was sitting with him and his three sons in a hole-in-the-wall restaurant downtown, having gristly slices of brownish meat and cartilage sliced onto the bare wooden table.  It was the first example of restaurant/butchery fusion I’d ever encountered.  Interesting idea, no?  My first “business lunch” in Somaliland will not soon be forgotten!