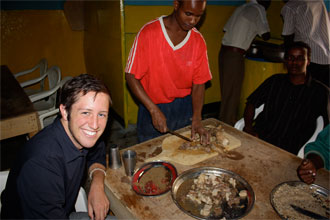 Greetings from Djibouti, a country so hot and humid that it’ll cloud the lens of your camera!  I flew in yesterday from Hargeysa to attend an eight-day conference on the politics and history of the Horn of Africa, hosted by the Rift Valley Institute.  Nearly all of the world’s most illustrious academicians specializing in the region – including Somaliland guru Mark Bradbury – have descended upon this tiny capital, which is normally better known for its massive French and American military presence.  It’s an exciting time to be here!

I’ve been unable to post any updates for nearly a month because the power cord for my laptop decided to give up the ghost.  I asked my parents to send me a new one via DHL, and it took an eternity to arrive, but now it’s here, and I’ve got a lot of things to write about.

First of all: work at the Academy for Peace and Development (APD) has been great.  Ever since the last foreigner left (Insight CEO, Patrick McWhinney, whom I spoke of in my previous entry), I’ve been toiling away in my very own office, with a sign over the door reading “Consultant”.  I’ve gotten to know all of my co-workers on a first name basis, and I’ve even started to spend my evenings with them, sitting around and talking about politics or other topics.

Ever since my computer died, this is what a typical day has looked like: I sleep comfortably until 9am, thanks to the relaxed working hours during Ramadan, the Muslim holy month of fasting.  I eat a surreptitious daytime meal in my NGO compound, prepared by my cook Mohammed, who is a zany old man who has wonderful stories, who learned how to cook under the Italians in Mogadishu, and who declares his departure each night by exclaiming, “I think it’s time for me to go home and kiss my wife.”

Work begins at 10am and ends at 2pm.  Because I haven’t had a computer, I have usually spent the entirety of these four hours reading.  This has meant that I’ve been able to plough through a number of excellent books during my first month in Hargeysa, including the excellent biography by Samantha Power called “Chasing the Flame”, Ahmed Rashid’s incendiary book about American-Pakistani relations called “Descent Into Chaos”, and a summary of Somaliland’s post-independence history called “Becoming Somaliland” by Mark Bradbury (mentioned above).  I’ve also started reading a field handbook published by the UN and the Canadian International Development Agency called “Democratic Dialogue”, and I’ve been delighted to see an enormous amount of explicit theoretical crossover between it and what I’ve been taught by Insight.  The book even includes models of the 4Ps and the Ladder of Inference!

My reading continues even after I’ve left work.  I eat a massive lunch prepared by Mohammed at around 2:30pm (standard fare: meatloaf with boiled cabbage and French fries) and then I settle into my beautiful balcony, where I read until ten o’clock at night.  I do break up the time by spending an hour every day working out (there are exercise bikes in the Caritas NGO compound, and I tend to have unlimited patience for push ups and wall sits), but the vast majority of my time is spent reading Hannah Arendt’s “The Origins of Totalitarianism” and Nietzsche’s “Beyond Good and Evil”.  Dinner is at around 8pm and involves whatever I didn’t eat for lunch.

Part of the joy of living in a new country is learning an entirely new social vocabulary.  For example, when you hear the term “three-quarter ninja”, what do you think?  Here in Somaliland, it’s a term that Somali men jokingly use to describe the extent of a woman’s piety.  If she wears just the hijab, she’s a “quarter-ninja”.  If she pairs the hijab with a full-body wrap, she’s a “half-ninja”.  “Three-quarter ninja” is if she chooses to show only her eyes.  And a “full ninja” is an Afghan-style burqa (which one would never see in Somaliland).

Other interesting terms: an SPU is a “special protection unit”, a team of two Somali guards armed with Kalashnikovs that every foreigner is obliged to hire if they are traveling outside of Hargeysa.  This was a measure put in place after two foreigners were killed by al-Shabaab back in 2003, and another in 2004.  Everything has been quiet since then.

Al-Shabaab means “The Youth” in Arabic, and represents the unruly armed wing of the United Islamic Courts from South Central.  They espouse a jihadist ideology, are unapologetic about their links with al-Qaeda, and supposedly have an extensive (albeit quiet) network of operatives in Somaliland, waiting patiently for the first expression of political instability that would allow them to seize power.  Nobody knows exactly how popular and powerful al-Shabaab is in Somaliland, but it always makes for excellent conversation.

South Central refers to Somalia proper, which from a de facto point of view excludes the states of Somaliland and Puntland.  Mogadishu is the capital of South Central.

Kulmiye is one of Somaliland’s three political parties.  The constitution allows only the three most popular political parties, based on regional elections, to contest the legislative and presidential elections, and Kulmiye has tended to be the second-most powerful of those parties.  Kulmiye graffiti can be found on most bus stops in Hargeysa.

And last, but certainly not least, is the term qat (or khat or chat or mir’a), which refers to Somaliland’s stimulant of choice: a fresh, green leaf imported from Ethiopia that, when chewed in abundance over the course of two or so hours, imparts a mild high equivalent to having had one too many cups of coffee.

For Muslims living in Yemen and the Horn of Africa, qat has played a vital role in daily life for centuries.  It is estimated that 80% of men in Somaliland chew qat on a regular basis, congregating in one of the thousands of makeshift shacks that line Hargeysa’s streets, whose walls tend to be made of woven cardboard cereal boxes and whose roof is invariably a piece of plastic tarp provided by the UNHCR.  Every night, these shacks burst at the seams with political innovation, cultural dialogue and neighbourhood gossip.  Indeed, many scholars suggest that no important decision in Somaliland, be it on a community level or a national level, takes place without first having been bounced around over a session of qat.  I have chewed the bitter leaf four times over the past month, and each time I have learned more about Somaliland society than at any other point during the week.

My two most recent qat experiences have been at APD itself.  The first time, my boss Gees informed me that a fellow Canadian and unrivalled expert in all things Somalia would be coming by to chew one evening, and that I should make a point of coming.  So when work finished that afternoon, I made my way to the official chewing room at the Academy, took off my shoes and plunged in.

Qat houses all tend to look the same: straw mats will be laid upon the ground and sturdy pillows aligned along the walls.  Chewers recline on these pillows while chain smoking, plucking leaves from their stem, and washing away the bitterness with giant gulps of deliciously sweet Somali tea.  The leaves themselves are wrapped in pink plastic bags; if they are exposed, they are likely to lose their freshness and potency, and moreover letting the stems sit unwrapped is a sign of disrespect.

Our guest that particular evening arrived shortly after I did.  His name was Matt.  He was one of the original founders of APD and marched in to Hargeysa back in 1991 with the pro-Somaliland SNM liberation movement (of which I later discovered my other boss Bobe was a guerilla commander).  He started his career in Somalia at the tender age of 21, when he decided to leave his burgeoning career with the Canadian military to pursue a lifestyle of humanitarianism. At the time, the only country that would take him was Somalia.  After having been caught in the outbreak of civil war in Mogadishu, and after having spent two years crisscrossing the country by plane, he was appointed the Assistant to the Canadian Representative in Somalia.  The logic was simple: though he was only 23 years old, he had spent the last two years in Somalia, and this was longer than any other Canadian in recent history.

Today, Matt is an unrivalled master in all things Somali.  He married a Somali woman (whom I would later meet at the Rift Valley Institute’s inaugural Horn of Africa symposium in Djibouti), partially raised his children in Somaliland, and is regularly invited back to the Somaliland capital to provide pro bono consultancy to the Academy he founded.  Most recently, he has acted as the hand-picked representative of the UN’s Secretary General for small arms trafficking in Somalia.  This means that he tends to spend his days chewing qat with imprisoned Somali pirates (so popular in Western media at the present moment), playing detective and trying to find out where they get their guns.  Needless to say, all of this makes for some pretty enlightening and unparalleled conversation.

As far as I’m concerned, the most fascinating idea that percolated to the surface during the two qat sessions with Matt was the comparison of warlord and Islamist capacities in Somalia and Afghanistan.  Though I was quite upset to learn that it would no longer be possible for me to do my first placement in Afghanistan as I had planned, I have since discovered that Somalia is the an excellent alternative insofar as it is also a collapsed state, and therefore shares a lot in common with Afghanistan.  Indeed, I have started to think very seriously about writing my Fellowship thesis on a comparison between the efficiency and efficacy of warlords and Islamists when it comes to peace and justice in Somalia and Afghanistan.  The dominant opinion seems to be that it doesn’t matter who is in power: whoever manages to secure peace and justice the fastest will secure the hearts and minds of the citizens, regardless of the particular ideology.  And generally, it is believed that the Islamists would win this battle.  Indeed, one has only to look at the phenomenal success of the United Islamic Courts in Mogadishu.  Why, then, did the Americans and the Ethiopians feel the need to push them out?  So interesting…