After receiving his BA from McGill University where he studied moral philosophy and international relations, Dan Green became Insight Collaborative’s first Fellow. His interest in the field of conflict management was piqued when he attended an Insight Partners Negotiation Skills Workshop in 2003.  As the first Insight Fellow Dan helped create much of the infrastructure of the Fellowship program as it exists today during his first placement in Boston.  In the fall of 2005 Dan began his first placement abroad by traveling to Thrangu Monastery in Jeykundo, Tibet (Yushu, China), where he studied the link between mindfulness, mediation and conflict management while starting a volunteer program in conjunction with Schools Without Borders.  He was the first foreigner to live in the Monastery in its 1300 year history.  His later placements included acting as a negotiation consultant to the Bangalore based transformation and dialogue firm, Meta-Culture, and leading a team of researchers studying the link between financial service provision and conflict in rural and urban communities in post-conflict Uganda, in cooperation with FINCA International.  His Fellowship theme centered on the role of emotions in negotiation, culminating in his final paper “The Tipping Point: the Role of Autonomy and Affiliation in Negotiation Breakdown” 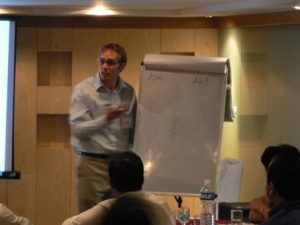 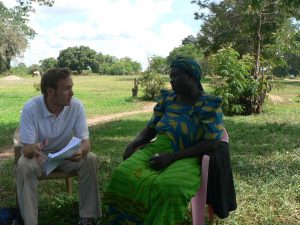 Dan Green, conducting research on the link between financial service provision and conflict in rural Uganda (2006) 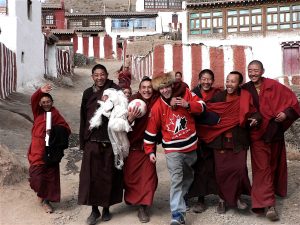